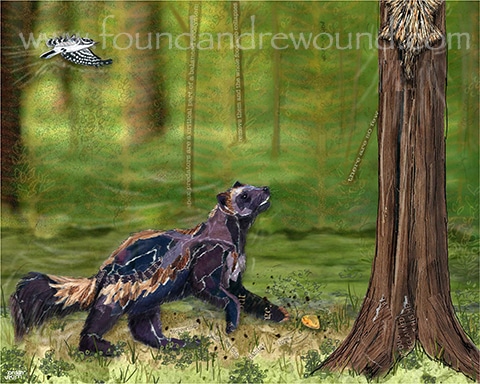 The wolverine is the largest member of the weasel family, and they are becoming extremely rare in the United States.  Due to habitat loss and fragmentation, these apex predators are losing ground and numbers. Experts estimate there may be as few as 300 left in the Lower 48.  This mixed media collage depicts one of these hunters chasing a porcupine.  Not sure if this would happen this way in real life, but wolverines have been known to eat porcupines.  It is the April image found in my 2023 wall calendar.  Although it works as a stand-alone image, each design in this collection was created to tell part of a story of connection by following a yellow stone as it is touched by the flora and fauna of Yellowstone National Park. Each image also includes a Native American word for this animal.  This image includes some facts wolverines and their habitat loss as well.

Reproductions of this image are available through my Etsy shop.

All of my cards and prints are printed on high quality, 100% post-consumer recycled, white, matte cardstock with archival ink.

Please don't take or use any images without permission.  Thanks.